4 Trends In US Energy

Solar. Wind. Natural Gas. Nuclear. Coal. With so many technologies competing for a market share of the energy sector, facts are easily overlooked. Being an energy consulting company that prides itself on providing unbiased solutions, Tenergy LLC wanted to clear up this information. Here are four trends in US energy.

1. Coal is No Longer King in the United States

Since its peak in 2008, coal usage has been in steady decline and currently makes up 24% of the power generation market. After over 100 years holding the energy crown, why the decline? Costs and climate

Not only is the levelized cost of electricity much higher for coal as compared to natural gas and utility scale wind and solar ($60-$143/MWh produced compared to $29-$45/MWh produced), it emits nearly twice as much CO2 when combusted than natural gas.

Combine those elements, and the outlook for coal is bleak. Recent estimates suggest the dethroned monarch electricity share will drop to 13% within the United States by 2050.

2. Make Way for Natural Gas… For How Long?

Natural gas has been used for industrialized purposes in the United States since 1816 where it was used to light the streets of Baltimore, Maryland. By 1859, Colonel Edwin Drake dug the first well in Pennsylvania which produced both oil and natural gas.

During the late 19th century, technology had advanced to allow natural gas to be combusted from a controlled orifice, paving the way for heating of homes and stovetops in the 1960s. In 2005, the shift from heating to electricity began thanks to the shale boom. Today, 37% of our electricity comes from natural gas power plants.

Without getting into too many details in this post, the main factors were high natural gas pricing due to demand, a huge amount of existing natural gas infrastructure, and advancements in non-conventional wells through horizontal drilling and hydraulic fracturing.

In short, horizontal drilling and hydraulic fracturing allow a single well to produce as much natural gas and oil as multiple vertical wells in the same area. This means that less of a footprint is needed for production and that the wells can stay in place much longer than a vertical well.

Hydraulic fracturing in particular is a hot topic of debate. Because of this, we will discuss the process in a little more detail. The figure below details the production aspect of a horizontal, fractured well. 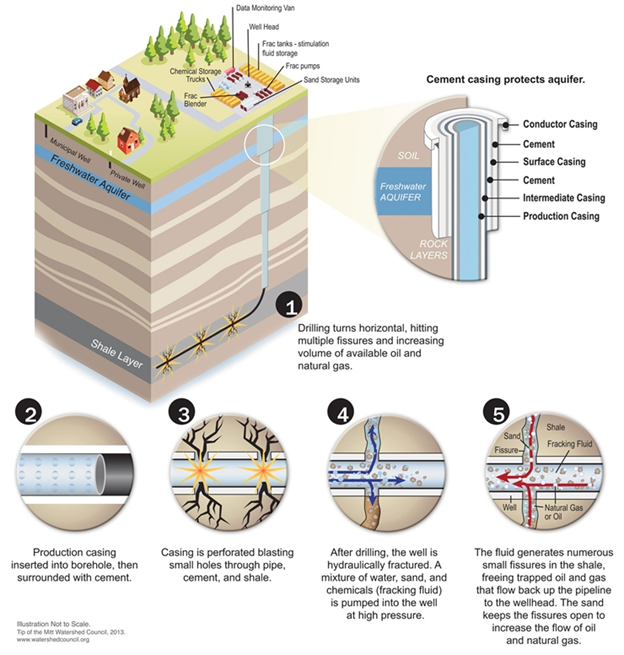 As shown, a natural gas borehole can penetrate through a freshwater aquifer. These water sources are typically 60 feet below the surface with depths up to 1,000 feet, and the borehole is encased in multiple layers of cement of other casing materials to prevent leaching.

Once a well turns horizontal (on average 8,000 feet for Marcellus shale in southwest Pennsylvania), the fracturing process begins, and oil, natural gas, and fracking fluid returns to the surface. From here the oil and gas are separated from the fluids which are generally recycled or kept in holding reservoirs or storage tanks to be treated.

As momentum from the natural gas boom grew, so did its market share in power generation. Due to its low emission factor and higher heat capacity, greenhouse gas emissions in the United States have been decreasing since 2008. As natural gas and renewables replace coal, these emissions will continue to drop.

The Future of Natural Gas

As the global demand for energy increases, so will natural gas production. In 2017, the United States became a net exporter of natural gas and this trend is projected to increase each year at least through 2050. Currently natural gas has a levelized cost of electricity of slightly more than $30/MWh and is anticipated to increase as exports increase to approximately $40/MWh by 2040. Despite this price increase, natural gas will remain a major resource in the energy sector for the foreseeable future due to its availability, high combustion efficiency, and the ability to generate electricity on demand.

Everyone with a pulse knows it. The industrialized world wants price stability and improved sustainability. This paves the way for renewable energy, particularly solar and wind. As technologies improve, costs go down and installations grow for both utilities and microgrids.

Solar has a low energy conversion efficiency, it needs unobstructed views, and takes up space. Why is it taking off not only in the United States, but across the globe? Emissions, or lack thereof, and flexibility.

From Sun to Electricity

Once a system is put in place, it doesn’t emit any greenhouse gases and requires little maintenance besides occasional housekeeping. Great! But how? The infographic below from EnergySage does a great job of detailing the process of converting energy from the sun into electricity 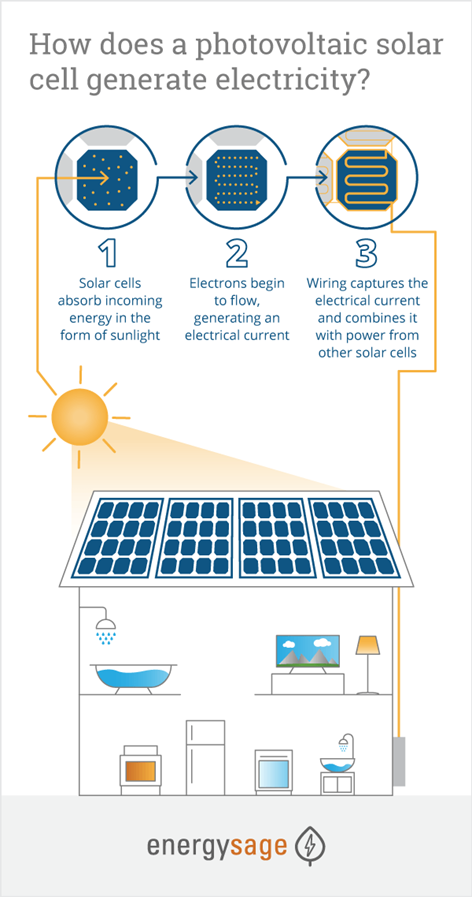 In addition to no carbon emissions, solar is a very flexible technology in that it can be installed on a utility scale as well as a microgrid. This has fostered growth in business, residential, and community solar installations due to net metering and scalability of systems.

To complement the installation flexibility, an overlooked advantage to this technology is solar ecology. Penn State University, a global leader in solar and overall energy research, defines solar ecology exchange and design “SEED” as integrative systems in which solar is used not only to produce clean electricity, but also improve individual locales by planting native vegetation, remediating soil, and sharing sites with the intentions of agricultural purposes such as sheep farming and beekeeping among other initiatives.

Solar Soars Into the Future

Today, solar makes up slightly less than 2% of the power market with a levelized cost of electricity of approximately $30/MWh. By 2040, this LCOE is expected to drop to approximately $25/MWh while other technology costs increase. This combination bodes well for future installations as it is anticipated that 17% of 2050 electricity generation will come from solar sites.

Wind has complemented human innovation since recorded history. Since the 1890s, wind power has been used to pump water and power homes and businesses in the US. Today, wind power is the largest producer of renewable energy, making up 38% of the industry and 7% of US power generation with a wide LCOE range of $30-$60/MWh.

How Does Wind Work?

Wind power is a generally basic concept. The setup of the turbine can be arranged either horizontally like a pinwheel or vertically like a double helix. As wind blows, the rotation of the turbine blades generates electricity. The diagram below goes into more detail. 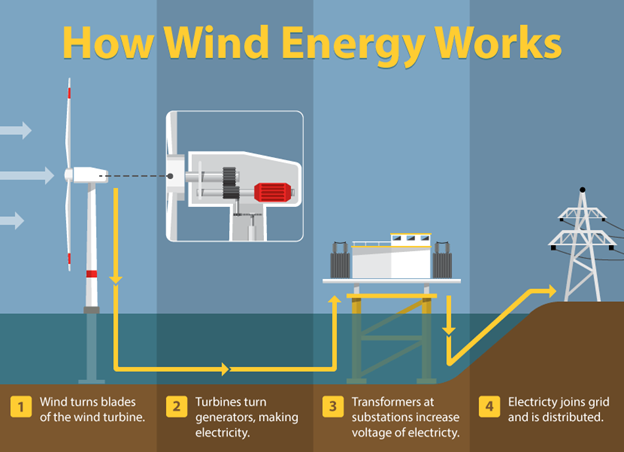 While wind production will increase into the future, its market share of the renewable sector will more than likely be taken over by solar. By the year 2050, it is expected that wind will make up 33% of the renewable market which would be 13% of the total US power generation market, and increase from 7% today. While the LCOE of wind should increase, its range is anticipated to be narrower than it is today with a range of $35-$40/MWh.

4. Not Much Changing with Nuclear

How Does a Nuclear Reactor Operate?

Similar to natural gas fracking, nuclear power operations are constantly debated. Advocates approve of its high efficiency and energy output as well as its nearly non-existent emissions whereas opponents argue against nuclear waste and disaster potential. The diagram below goes over the operation of these power plants 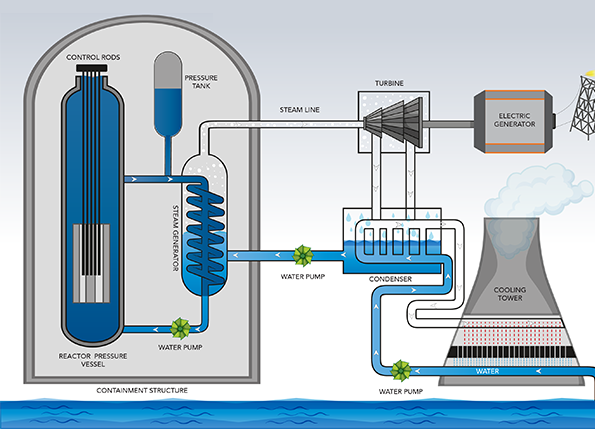 Like a typical coal or natural gas power plant, the function is the same, but the fuel is different. The goal is to turn liquid water into steam in order to spin a turbine to create electricity.

Instead of combusting a fuel, a nuclear reactor relies on the nuclear fission of 235Uranium or 239Plutonium where as neutrons are released, so are great amounts of exothermic energy (heat). The control rods of these reactors are made up of the elements mentioned and are raised or lowered into water to produce less or more electricity.

What About the Waste?

Once a control rod comes to the end of its useful life, it is deemed nuclear waste. What happens from there? The retired rods are typically placed on-site, underwater until they are able to be handled by humans where they are encased in concrete or sent to be recycled to create more nuclear control rods to be used once again in a nuclear reactor. Once Yucca Mountain or another repository is opened, it will become the final resting place of the spent fuel.

Nuclear power, though decreasing overtime, is not projected to be going away for the foreseeable future. It still remains the most reliable source of clean energy in the US, and its quick reaction time to grid demands leaves it as a preferable power source.

The United States power generation market is ever changing. Longtime dominant sources are on their way out whereas booms and new technological developments take their place. The future is undoubtedly powered by renewables and natural gas due to their low costs and abundance. We at Tenergy LLC wanted to provide clear facts on the major players in the power generation market, and we hope we accomplished this.

If you have further questions for us or would like to learn more, please feel free to contact us! 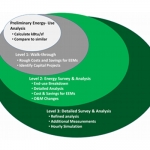 Importance of an Energy Study